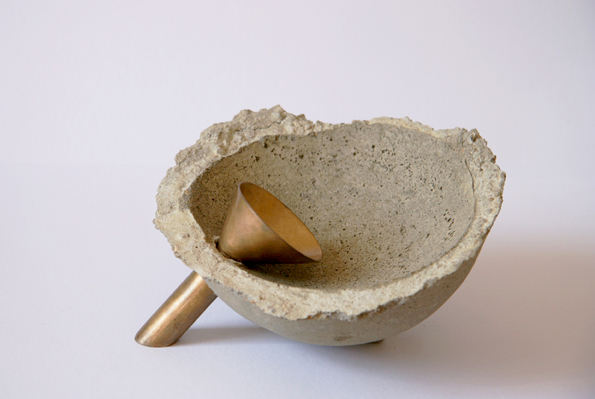 Cement bowl with funnel 1. set of 3 bowls developed from an explorations of funnel shapes in 2d sketches. In which variables of angles and shapes were mapped out in order to look at what point things stop being recognisable

The aim of the series of bowls has been to explore the way in which we comprehend functional objects and look at the associations that are brought up when function is suggested in the work. Taking inspiration from industrial aesthetics and the aesthetics of function, my interest lies in merging recognisable elements with new forms In order to question at what point things stop being recognised as functional and what is it of the object that makes us consider if to be a tool.

By using the concept of an eating environment I am able to question what is acceptable, both of the object and the material it is made of, as well as its placement with in a setting. The sink is the place in which move from the clean internal environments to the unclean external. With the plug hole becoming the where things cross from acceptable to unacceptable.